Deriving vignettes for the rare disease AADC deficiency using parent, caregiver and clinician interviews to evaluate the impact on health-related quality of life

Aromatic L-amino acid decarboxylase (AADC) deficiency is a rare genetic disorder caused by mutations in the DDC gene which codes for the AADC enzyme. AADC is responsible for the formation of the neurotransmitters serotonin and dopamine, and AADC deficiency is characterised by movement disorders, including loss of voluntary movement, hypotonia and intermittent oculogyric crises.1

Although the majority of cases documented in the literature are severe and patients are bedridden for life, mild and moderate cases have been reported.2,3 A small subset of patients has been reported to benefit from treatment with dopamine agonists and monoamine oxidase B inhibitors, but in general there is no or poor response.2

In order to guide reimbursement decisions, cost-effectiveness studies are often required by health technology assessment agencies such as the National Institute for Health and Care Excellence (NICE) in the UK. Cost-effectiveness studies require a robust measure of health-related quality of life (HRQoL) derived from a verified instrument such as the EQ-5D-3L, a descriptive system covering five dimensions (mobility, self-care, usual activities, pain/discomfort and anxiety/depression) over three levels of severity (no problems, some problems, and extreme problems).4 However, given the nature of AADC deficiency, completing such questionnaires is not possible for most patients.

A decision was made to develop vignettes describing health states for use in assessing HRQoL and subsequently informing cost-effectiveness decisions in AADC deficiency.1 To enable the vignettes to be a useful tool for an ongoing clinical trial, they were developed from a parent/caregiver perspective of AADC deficiency.

The five health states were:

The vignettes were developed over five stages, summarised in Figure 1, with caregiver involvement early on in the process to ensure the project team gained a true insight into life with AADC deficiency. 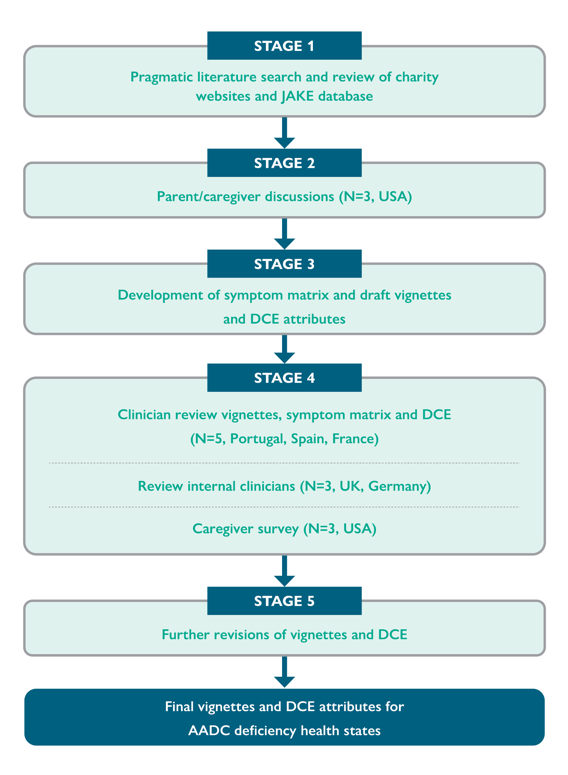 During stages 1 and 2 of vignette development, consensus over key symptoms and signs were high, although the literature focused on behavioural and autonomic symptoms, which caregivers did not. The symptoms of AADC deficiency identified during these initial stages are summarised in Table 1:

Table 1: Domains and symptoms identified in stages 1 and 2.1

Descriptions were then applied to these symptom and functioning domains across the five health states to produce draft vignettes in stage 3.

Following clinician and caregiver feedback in stage 4, the vignettes were revised to include autonomic symptoms (abdominal problems, drooling and nasal congestion), mental impairment, developmental milestones not being met, and hypoglycaemia. An additional vignette was also created to capture the burden of care and impact of AADC deficiency on parents and caregivers.

The study revealed a difference in focus between caregivers, clinicians and the literature, which reinforced the importance of including caregiver involvement early in the process. Caregivers focused less on autonomic symptoms and behavioural issues than the literature, while the literature did not highlight the burden of medication and hospital treatment that the caregivers did. This illustrates the importance of including multiple stakeholders, which is of particular importance in rare diseases with few patients and clinical experts to contribute their knowledge.

The authors acknowledged a limitation of the study – that due to the rarity of AADC deficiency, the sample size of parents and caregivers was small, with only five countries represented. Variation between healthcare systems throughout the world may mean that results do not reflect the situation globally.

The vignettes will be used in cost-effectiveness studies in the UK and France (both countries were represented by members of the panel of parents and caregivers), with further reviews to ensure they are valid for use with French clinicians.

GL-AADC-1050 | February 2022
We use cookies on our website to give you the most relevant experience by remembering your preferences and repeat visits. By clicking “Accept”, you consent to the use of ALL the cookies. However you may visit Cookie Settings to provide a controlled consent.
Cookie settingsACCEPT
Manage consent

This website uses cookies to improve your experience while you navigate through the website. Out of these cookies, the cookies that are categorized as necessary are stored on your browser as they are essential for the working of basic functionalities of the website. We also use third-party cookies that help us analyze and understand how you use this website. These cookies will be stored in your browser only with your consent. You also have the option to opt-out of these cookies. But opting out of some of these cookies may have an effect on your browsing experience.
Necessary Always Enabled
Necessary cookies are absolutely essential for the website to function properly. This category only includes cookies that ensures basic functionalities and security features of the website. These cookies do not store any personal information.
Analytics
Analytical cookies are used to understand how visitors interact with the website. These cookies help provide information on metrics the number of visitors, bounce rate, traffic source, etc.
Performance
Performance cookies are used to understand and analyze the key performance indexes of the website which helps in delivering a better user experience for the visitors.
Uncategorized
Undefined cookies are those that are being analyzed and have not been classified into a category as yet.
Preferences
Preference cookies are used to store user preferences to provide content that is customized and convenient for the users, like the language of the website or the location of the visitor.
Functional
Functional cookies help to perform certain functionalities like sharing the content of the website on social media platforms, collect feedbacks, and other third-party features.
Advertisement
Advertisement cookies are used to provide visitors with relevant ads and marketing campaigns. These cookies track visitors across websites and collect information to provide customized ads.
Save & Accept